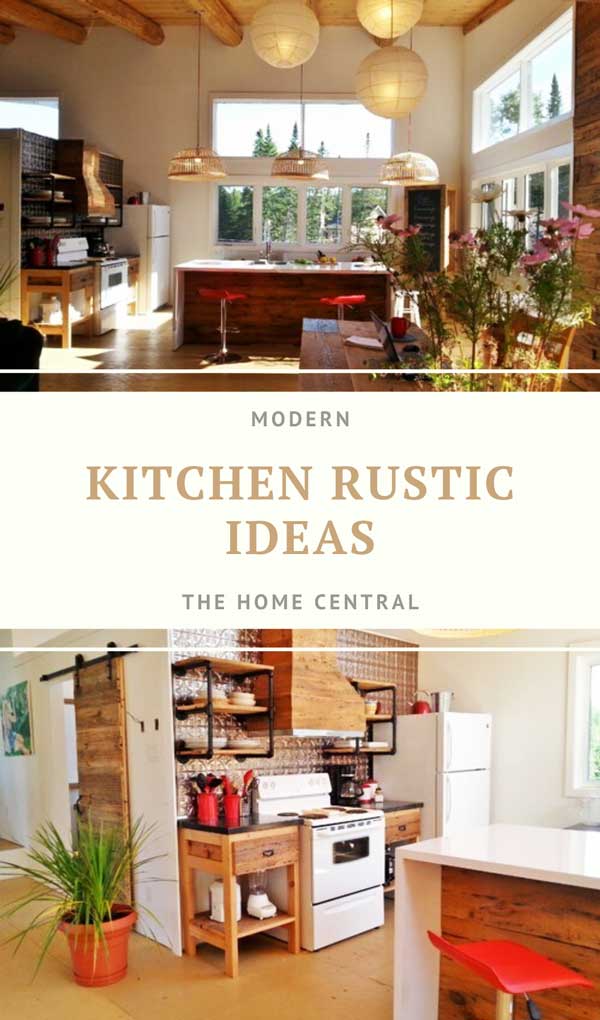 Designing and building the house this kitchen sits in was a real family affair. “My father is 81, and he still loves to build — he wanted to build a Canadian-style log home in the woods near the Rivière Dufresne, but I told him it was not light enough,” interior designer Lucie Arbic says.

“So he said, ‘OK, you draw me a house, and I will build it.’” She did, and planned a space for herself over the garage, which also serves as her father’s workshop. The new space was a change of pace for the designer, whose children have grown up and flown the nest. Now her new nest is perched among the trees in a multigenerational homestead she shares with her father and her sister.

Kitchen at a Glance

BEFORE: This is Lucie Arbic’s 81-year-old father, Richard Arbic, hard at work building the house. “I cannot even look while he does it,” she says. Eventually he will move onto one floor of the main house, though she jokes that he’s probably going to “live” in the garage with all of his tools most of the time.

“I love being surrounded by nature; I could live in a glass house,” Lucie says. She opted for lots of windows instead of upper cabinets so that she could enjoy the views as much as possible.

In fact, the designer loves modern style, but the more time she spent surrounded by nature, the more she wanted to bring that rustic feeling into her home. So crisp white and industrial touches mix with reclaimed wood.

The wood came from an old farmhouse that her father and her son dismantled together. The cedar logs on the ceiling are reclaimed as well. “The wood adds history and warmth to a house,” she says.

The island is 8 feet by 3½ feet (2.4 meters by 1 meter). The reclaimed wood wrapped in a crisp white laminate countertop is just the right balance of modern and rustic. For a more seamless look, Lucie used ColorCore from Formica. It is white through and through, and thus the edges and seams are hard to detect.

“I didn’t want lots of cabinets; I wanted the elements to look more like furniture,” the designer says. She designed every piece and handed off the drawings for her father to make them for her, including the two pieces that flank the stove and the vent hood.

The two worktables were inspired by butcher block tables. They are topped with imitation marble laminate counters. Her plumber put together the pipes for the shelves. A long console table runs underneath the windows.

The designer opted for open shelves because she wanted everything to be low-maintenance and easy to grab.

The backsplash is a simple laminate ceiling tile attached with adhesive. The three-dimensional patterned tiles add shine and texture to the range wall.

While she loves to look out the windows, the designer-cook didn’t want to have her back turned to her guests when working in the kitchen, so she placed the sink in the island, looking out into the main living space instead.

“I love to cook and have people over, and wanted to bring a convivial and welcoming feeling to the loft and kitchen,” she says. “This way I can visit while I cook and clean.”

Because she is still waiting for the dishwasher to be installed in the island, she appreciates her 10-inch-deep sink for doing dishes.

The sharply rectilinear stainless steel basin and industrial-style faucet with built-in sprayer add a modern touch. The recycling and trash bins are also stashed under the island.

The floor, for now, is simply painted plywood while she waits for her father to have time to finish it. “It will also be plywood but a nicer quality, painted to look like planks of wood,” she says. For now, the surface suits the loft space just fine.

A tight budget was involved in every decision. “When I saw these stools available at a local store for $15, I yelled, ‘Get the car!’” Lucie says with a laugh. While the island could accommodate three stools, the store had only two, so that was good enough.

Lucie combined inexpensive natural-fiber light shades from Ikea with red corded lights from the hardware store to create a trio of wonderful pendant lights over the island. She estimates the total cost of each was about $45.

She designed the farmhouse table and benches as well. Because their planks served as the ceiling of the first floor of the farmhouse and the floor of the second floor, they are not all straight. She left the original green paint on some of them and had her father turn them into benches.

While the overall size of the loft is modest at just 700 square feet (65 square meters), ceilings that soar from 10 to 16 feet (3 to 4.8 meters), the open-plan design and all of the windows make it feel much larger.

The chalkboard is actually a pantry cabinet door. Placing it here enlivened what would have been a dead corner. “It looks cute for the photos, but what I really use the chalkboard for is to keep track of what I need from the store,” the designer says.

Lucie and her daughter painted the bird in motion on the accent wall together, and it’s a fitting image with the trees seen through the windows. The accent wood on this wall ties the dining-living space to the kitchen. Paper lanterns, $5 each, add a lovely glow and sculpture overhead.

While the designer loves to fill the table with dinner guests, she also uses the space as an office.

Next on her punch list is choosing the right fireplace, among other projects. “My father is the one pushing me,” she says. “I can’t keep up with him.”